New York State Fair Facility
Right after Thanksgiving we set up our donation and receiving center at the New York State Fair Agriculture Building. For approximately 30 days, volunteers repair bicycles that come in on a daily basis from hundreds of individuals who are generous enough to take the time to load their vehicles and donate their bicycles to our program. As bicycles enter the Agriculture Building, we immediately sort and label bicycles that we will be able to repair from bicycles we will use for parts. Having this space to do this is essential. Without the help from the leadership of the New York State Fair, we would never be able to repair and produce thousands of bicycles.

Syracuse Department of Public Works
We have generally used the Saturday before Christmas as our giveaway day. Early Friday morning all of these bicycles are loaded onto large trucks that are supplied by the Syracuse Department of Public Works. We are very blessed to have this relationship with the Syracuse DPW. Within a matter of four hours these bikes are ferried to Fowler High School. Volunteer students then shuttle them into the three basketball courts at the school.

Volunteers
Volunteers are one of the most exciting benefits to our program. I have been blessed to have come in contact with some of Central New York’s most giving citizens. The friendship and camaraderie is something that I look forward to as much as seeing the faces of those who are excited to receive their bicycles.

Repair Volunteers
We have a number of tasks for our volunteers. You don’t have to be a super bike mechanic to help our program. We need volunteers to:

Repair volunteers range in abilities. We are able to train many volunteers to change bicycle tubes and tires and for those more advanced, bike cables that control shifting and breaking. 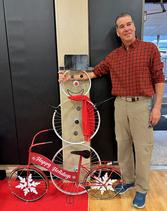 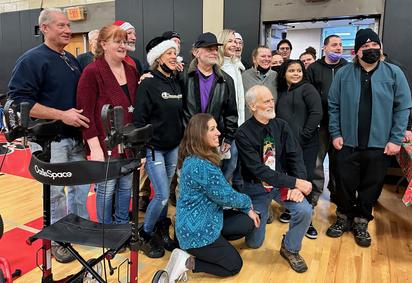 We generally start our giveaway at 10 a.m. on the Saturday before Christmas. From as early as five in the morning, lines start to form outside the high school. In an organized fashion the public is invited in and parents and children scramble to pick out that special bicycle.

Who helps us and how does it work?

Bernice Bradway
Former principal Bernice Bradway instituted this program for the school. She felt strongly that this would be a positive learning experience for the students as well as a central location for low income families to come and receive bicycles. 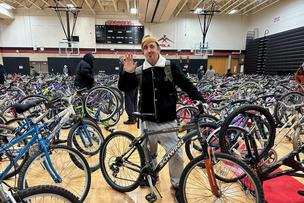